All young children will have trouble pronouncing certain words and sounds correctly at some point. We don’t think twice when we hear an 18 month old say “nana” for “banana”, or when a 3 year old says “wed” for “red”. This is because they are using a predictable set of patterns to simplify speech as they learn to talk. These patterns are called phonological processes and they are a normal part of children’s phonological development.

Phonological development is the gradual development of an organised, adult like system of sound contrasts. It contains three main aspects:

As children grow, their speech becomes clearer and more accurate. Sometimes we notice particular changes (remember when she used to ask for “pasghetti” for dinner?), but more often that not, we simply reflect on the fact that they are talking more (and more and more!) and that it is becoming easier to understand them.

But what happens if your child isn’t getting clearer? Or what if you notice that the rest of their friends can say “fish” and “go”, and your child is still saying “tish” and “doe”. Should you worry? Should you wait and see?

Below is a link to download my phonological processes chart. It lists the most common phonological processes and gives an approximate age at which children should stop using them. If your child is making errors that aren’t on this list, or if they are making some of these errors and are older than the expected age, or if you can hardly understand a word they are saying because they seem to be making lots of these errors, it may mean that they have a phonological disorder. 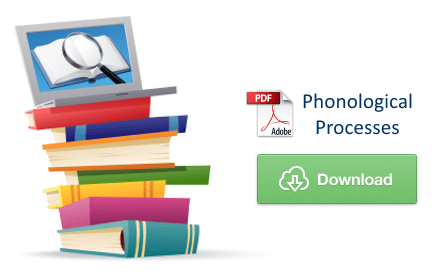 What is a Phonological Disorder?

A phonological disorder is a type of speech sound disorder. It refers to a child who is using phonological processes that are no longer considered normal. This may be because:

1 – They are using different processes that are not normally seen in typically developing children.

An example of this is the phonological process referred to as, “backing”. This is when front sounds such as /d/ and /t/ are produced as back sounds such as /g/ and /k/. For instance, “dog” becomes “gog” or “tea” becomes “key”.

2 – They are using “normal” processes but these are persisting beyond the age we would have expected them to stop.

3 – They are using so many processes at once that their speech has become extremely difficult to understand.

Let’s have a look at the sentence- “I see a cute dog running”. A 3 year old who is using the phonological process of gliding /r/ → /w/, might say this sentence as, “I see a cute dog wunning”. This is a normal error for their age and I would bet that most people would understand what this child was saying.

On the other hand, what if that 3 year old was gliding /r/ → /w/ but also stopping /s/ sounds, fronting /k/ and /g/ sounds and using final consonant deletion. Their sentence might sound more like this, “I tee a to dod wunning”. That’s much more difficult to understand! Possibly only people very familiar with this child, and even then, perhaps only those with a bit of background knowledge about what the child was talking about, might be able to figure this sentence out. None of these processes are strange for a 3 year old to be using, however because they are all being used at once their intelligibility (speech clarity) has suffered.

How clear should my child’s speech be?

A child’s level of intelligibility depends on their age. Below, you will find a simple guide to explain how clear children should sound to unfamiliar listeners, while having a conversation. Keep in mind too, that young children often become harder to understand when they are really tired or very excited, so it’s probably best not to base your judgment on how they sound in the middle of the night or when they are opening birthday presents!

Remember- This doesn’t suggest that a 4 year old is expected to produce every single word accurately. It simply means that even with the odd speech sound error or age appropriate phonological process, a stranger should be able to understand what they mean.

If you are concerned or simply unsure about any aspect of your child’s speech development the best thing you can do is ask a speech pathologist for advice. All children are different and I can assure you that we will not be sounding the alarm because your child turned 5 yesterday and is still saying “wabbit” today.

However, it is extremely important not to ignore speech sound disorders because left untreated, they can affect children’s reading, spelling and writing skills and have a negative impact on their confidence and social skills, such as not wanting to speak in front of the class, or having difficulty talking to new people to make new friends.

The great news is that there are so many well researched, evidence based phonological interventions available. Therefore, if your child does require some speech therapy, a speech pathologist can work with you and your child to pick the treatment approach that will best suit and benefit your child.

Don’t forget to Like Modern Speechie for more information and tips to help your child become the best (and clearest) communicator they can be!